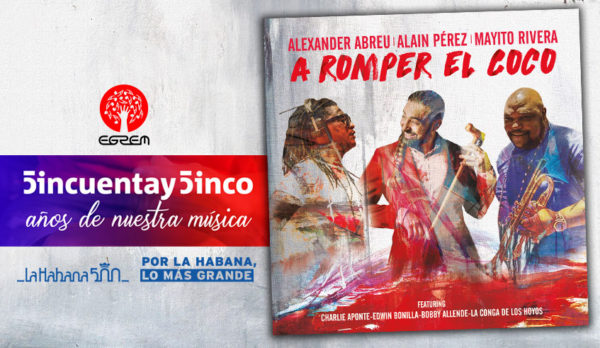 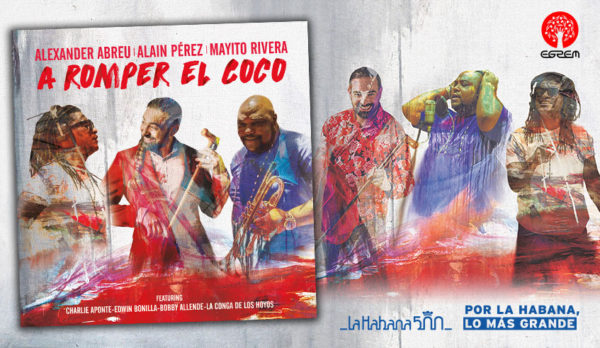 The EGREM record label has stood out throughout its 55 years of uninterrupted work for being the main distributor of the best musical productions of the country. And now they brought us “A romper el coco. Tributo a los grandes Conjuntos de Cuba Vol. I” (Let’s crack the coconut open. Tribute to the great musical ensembles of Cuba. Volume I.).

Talking about ensembles within Cuban music leads us back to the 40s of the last century, and evokes names like the ensembles of Arsenio Rodriguez, Casino, Rumbavana, Son 14, Sonora Matancera, Chappotin y sus Estrellas, Roberto Faz, Sierra Maestra, Cheo Marquetti y su Conjunto, El Niño Rivera y su Comban, El Conjunto Matamoros among many others that took Cuban music to a higher level and obviously set the standards for what is now known as popular dance music and even the so-called salsa.

Three outstanding artists and 10 pieces, rigorously selected from the wide repertoire of songs popularized under this format, are part of the phonogram that, as announced, is a tribute to this instrumental form. The album mixes our Cuban flavor with contemporary vibes. Son montuno, pilon, bolero, afro and conga go together with typical orchestrations that recall the golden days. There are many trumpet, tres and piano solos in the playlist, performed under a different, modern sound processing and brought by the hand of Alden Gonzalez and Geovanis Alcantara, producers of the album.

Alexander Abreu paid homage to Los Bocucos when they had Pacho Alonso and his “¡Qué rico está esto!”, written by Enrique Bonne, one of the three living project composers, El Niño Rivera with “El Jamaiquino” and the Rumbavana Ensemble with Joseito Gonzalez in “Negro de Sociedad”.

Mayito Rivera surprises us again with his special sonero voice, in a medley of “El Ciego Maravilloso”, originally performed by Arsenio Rodriguez, “Me la llevo yo” (Homage to the Matamoros Ensemble) and “Un pedacito” (popularized by the Chappotin Ensemble, played by Lili Martinez and Miguelito Cuni).

But without a doubt, seeing these three great singers united in a Medley dedicated to Son 14, reinterpreting works by Master Adalberto Alvarez and Tiburon Morales is an unparalleled listening experience.

International multi-award-winning guests show their respect for our music: the voice of Charlie Aponte (Puerto Rico), the percussion of Edwin Bonilla (Puerto Rico) and Bobby Allende (New York) and the traditional Conga de los Hoyos (Santiago de Cuba) are some of the amazing features of this album.

The inclusion of two pictorial pieces by the visual artist Alberto Lescay: “Escalera” and “¿Qué somos?”, together with the art direction of Alden Gonzalez, Amels Rodriguezy and Lescay, turn this production into a treasure of musical art. And now it’s time to say: the coconut cracked open!