The drum feast between grounds and reasons 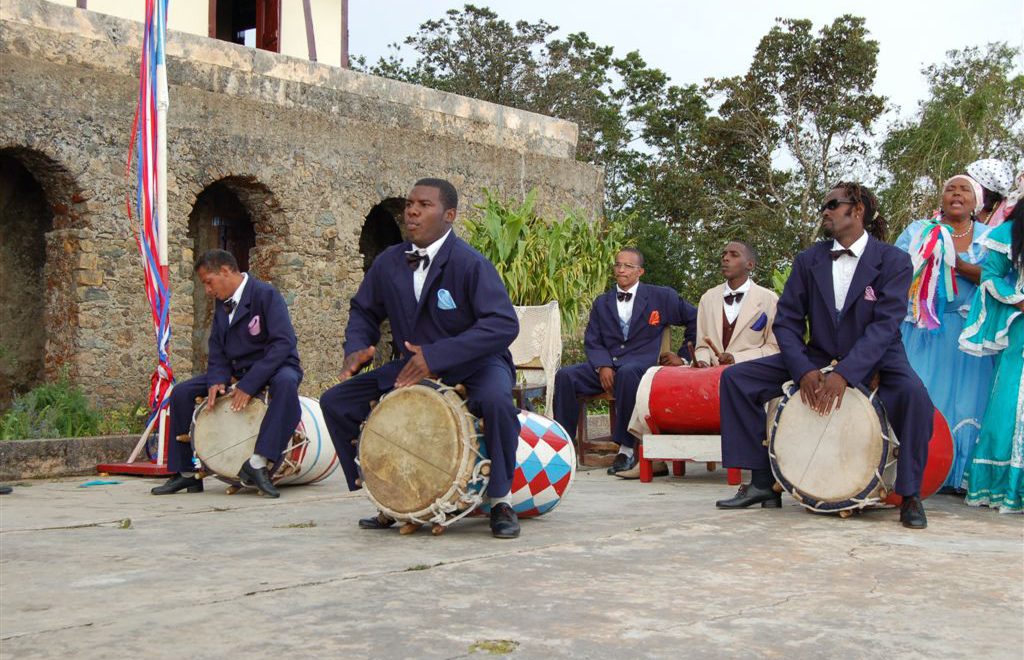 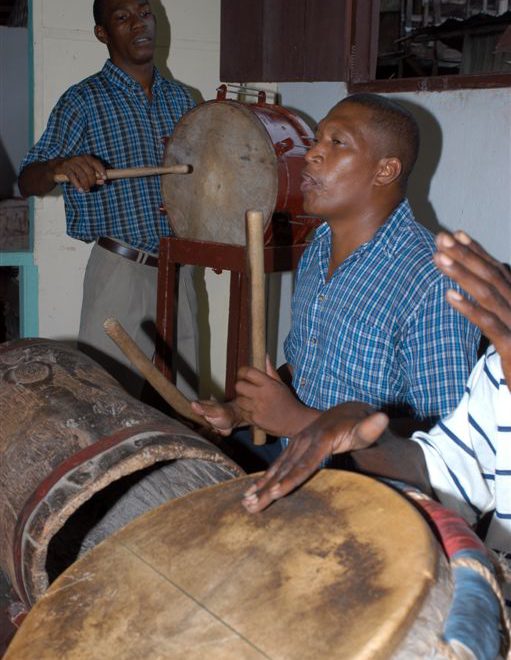 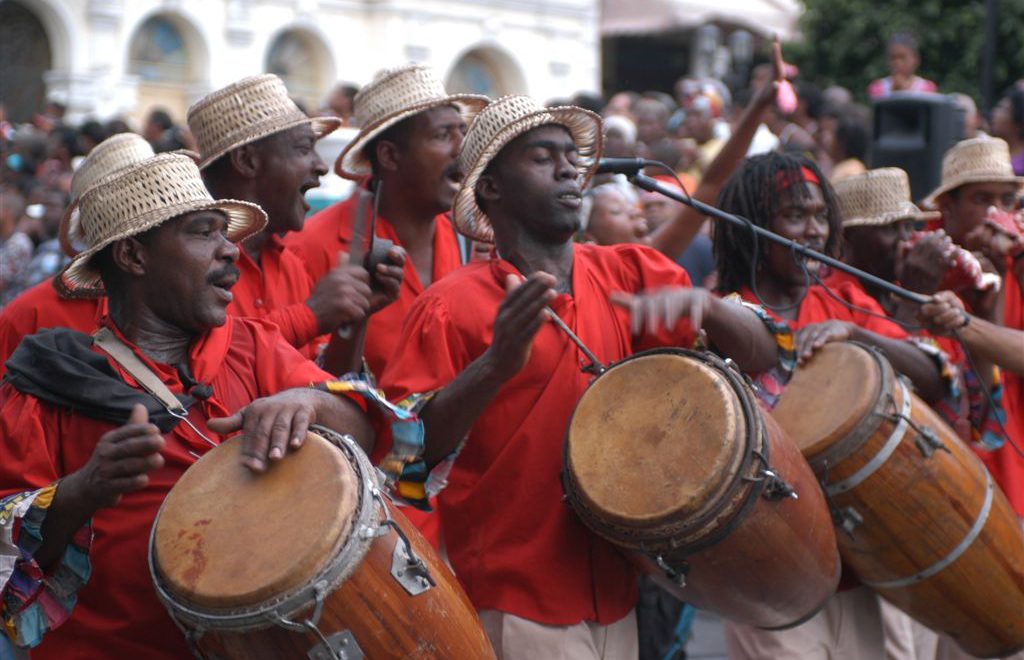 “Better watch them from afar. Their customs, dances and songs are of a wild community, distant from everything pertaining to civilization”. Thus were the thoughts of the “La Cornisa” plantation owner, who accompanied by his wife watched the slaves in their free day celebrating with their liturgical songs. But they could not stop the sound of the drums, the rhythm, the cadence, the heat coming from their feet that, restless at the beginning, ended by disobeying reason. Then, their bodies were invaded by unexplainable movements, pouring their energies, until they found a new spirit. It was the spirit of a new feeling, from which roots a stem started to sprout and which young branches would end up hastily shaping the robust tree, the tree of Cuban musical culture, that, which despite having a source of peninsular tunes and renaissance beats, one day also found its dawn in the sounds of the drums.

That novel sonority came from the instrument the black man came to create and model, according to his new needs to express himself or to resist the onslaught of colonialist culture. In the beginning it was a tub to which wider end a hide patch was placed, attached to the body of the instrument with nails, fine-tuned by the heat of fire.   In Dr. William W. Megenney essay, one can appreciate that ngoma (Caja, Yuca and Cachimbo) drums preceded the drum, the former coming from Bantú culture; they were made of wooden staves and were barrel shaped, wide mouthed at one of its sides. Today the Batá drums would be the successors of the ngomo drums.

As another antecedent of congas we can mention the Makuta or Tahona drum, later on named “tumba palabra” also coming from Bantú culture.

It must be emphasized that the slaves, destitute of any personal belongings and far away from the source providing his resources to create their instruments, had to adapt to the new world, recreating those instruments similar to the ones they used in their distant land.

As time went by the features of the percussion instrument were modified. But not until the forties or fifties of the XX century, the congas incorporate the ironworks to obtain better tuning. Different types of congas are used according to the desired sound.

Re-quinto: Slim body conga of sharp tuning. Its function in rumba is improvising.

Macho or 3-2: Conga of medium body, can be tuned in two ways: one the sharper to be able to play as main tumbadora in a two or more congas ‘format; the other deeper, more acute to play only in rumba.

Female or tumbadora: deep, acute tuning. Its body is wider

Re-tumbadora: this is the deepest, most acute of all. Its body is wider than the rest.

The truth being that those men, negroes and mulattoes knew how to weave the sense of African rhythm with the Hispanic musical texture, that as a dominant culture tried to hide their expressions in the silence. Assimilation of Hispanic culture, far from representing total disappearance of the African heritage brought by those slaves in the baggage of their memories, gave way to a process named transculturation by Dr. Fernando Ortíz.

We find that the transculturation process meant for the slave adoption of a new culture, but at the same time it also expressed as a stubborn resistance aimed to avoid losing his own.  So that Hispanic-African mix came about, displayed at the beginning by European musical genres as Zapateo, Fandango, Pasodoble, Bolero and seguidillas among others, associated to African rhythms.  Thus a musical enriched mix appeared with a different and novel flavor, birthing what today we know as Cuban music, the African contribution being the crystallizing element of its formative process. Of that incredible mix were born: the Son, Sucu Sucu, Mambo, Changuí, Timba, etc.

Many important interpreters have become famous through the congas. Among them we remember the great percussionist Luciano Pozo González (Chano Pozo), a rumba dancer per se who, together with the great jazz musician, Dizzy Gillespie, created a perfect musical mix in the jazz genre.

Cándido de Guerra Camero is another of those great musicians, known as Cándido Camero, who is believed to the first musician playing more than one tumbadora to achieve whole melodies.

On the other hand, Federico Arístides Soto, better known by the surname of “Tata Guines” was one of the most splendid expressions as to performance of tumbadoras, becoming a legend among the most illustrious performers of congas worldwide.

Miguel Aurelio Díaz Zayas, also known as Angá, despite his early demise in 2006, made a difference in Cuban musical history due to his dexterity and contribution to research in the wake of new sonorities in the tumbadoras.

Mention should be made of the flag group of the rumba genre: Los Papines. Masters of the rumba. Excellent percussionists and performers of excellence in their deluxe presentations for more than 40 years.

José Luis Quintana Fuentes, Changuito, master of masters, left an indelible imprint during his career. A virtuoso of the tumbadora of great international repercussion.

Another transcendent musician in percussion instruments, specifically in cylindrical drums known as pailas, was the well-known musician, Guillermo Barreto Valdés, an instrumentalist of excellent musical ear, of great rhythmical stability, who contributed extraordinarily with his performance to Cuban music. That is the reason why the cultural event known as the “Drum Feast” in this year 2018 is dedicated to his memory.

Participating in the event: most of the Cuban popular dance orchestras as well as foreign guests, Cuban dance companies, jazz groups and other folkloric groups.

Undoubtedly it will be a great spectacle. A well-deserved tribute from my view point to all those who have guided the heart towards the development of the percussion instrument. A feast where today it will be quite difficult for the owner of “La Cornisa” to keep away from the excellent sound of Cuban drums.