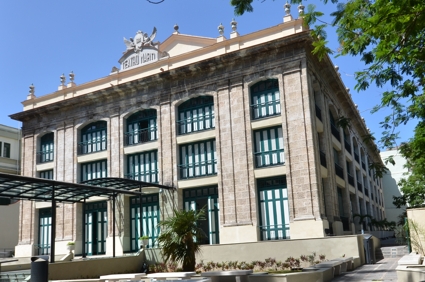 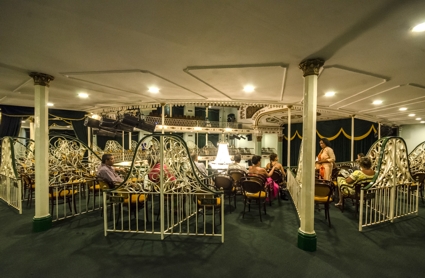 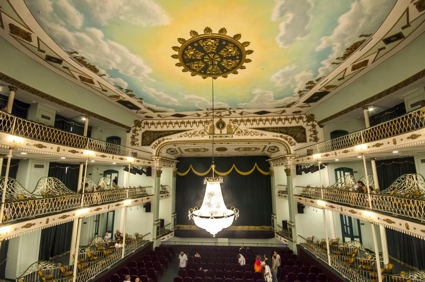 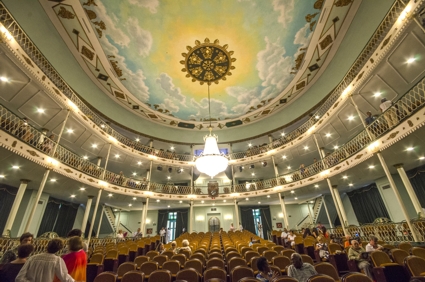 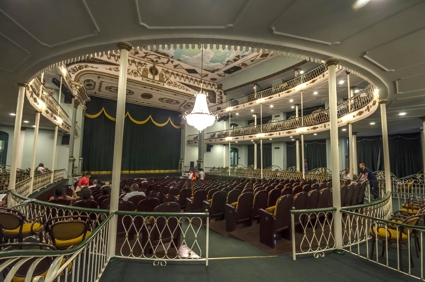 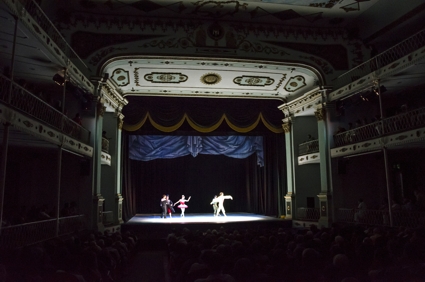 At the end of the sixties decade of the past century I attended possibly, the last staging at the  Martí Theater: “Santa Camila de la Habana Vieja” where Camila, main character, addresses all the rituals and saints of the Afro Cuban religion in order to rescue the love of Ñico, whom she believed had lost. Carlos Pous interpreted Changó, the warrior saint who followed Camila mishaps from the altar. Pous’ histrionic skills were such that without uttering a word, he could trigger the most uproarious laughter from the public.

Casts acting at the Martí Theater were without doubt of the highest rank, attracting for years a faithful public to the best of Cuban theatrical humorous satirical plays – “teatro bufo” – presentations, most of them mocking Cuban reality of the times, from politics to social events falling under the derisive scrutiny of script writers and actors as well.

Inaugurated in June 8, 1884 and baptized Irijoa, the theater was the great life project of Basque Ricardo Irijoa, who invested the largest part of his fortune in its construction. Nonprofessional pro-bono “El Buen Pastor” convent actors were in charge of the first representation. Irijoa died a poor man and the theater had to stage a charity presentation to address the financial needs of his widow and children.

With formidable acoustics, its superb ventilation depended on its lateral doors and picture windows that were kept open during presentations, that is why the theater was also known as the “Hundred Doors Coliseum” or Summer Theater, since its first shows were staged during very warm summer days, thus the need to keep a fresh indoor climate.

Located at the corner of Dragones and Zulueta streets, the building stood three floors’ high with a 2,500 seating capacity:  1 090 in the box area, 400 in stalls, 70 in easy chairs and 400 in seats and gathering tiers.

The building has a handsome architecture with forged iron inner columns, marble floors, carpets, curtains, mirrors and ornamental lunettes as well as other elements rescued during the restoration process.

A few technological advancements for the times were included in its original design, such as a mechanical system allowing the positioning of the orchestra, the stage and the lobby at the same level, to transform it into a ballroom, and a space for meetings or other social activities.

Its versatility rendered the theater as an appropriate place for workers ‘meetings and rallies, celebrating in 1891 the International Workers’ Day without permission of Spanish authorities, who took control of the theater terminating Irijoa’s management of same.

In time the theater was involved in adverse political events ending with the explosion of a bomb in 1898, last year of Spanish domain on the Island. With the coming of the XX century and the new republican history, it was chosen as seat for the National Assembly in 1900 and re-baptized as Martí Theater, honoring the Cuban Apostle of Independence.

The mix of Spanish and Cuban artists filled the theater great hall that also hosted seasonal presentations of the Pubillones Circus and famous opera premieres as Pucinni’s “La Boheme”.

Tango made a great difference after 1929 in the Martí stage with presentations of Paco Spaventa, Agustín Irusta, José Bohr, Charlo, Mercedes Simone and finally Carlos Gardel with the coming of sound films.

But the best was yet to come by the hand of the vernacular theater through the unforgettable pieces of such well known composers and orchestra directors as Rodrigo Prats, Gonzalo Roig and Ernesto Lecuona enhancing the character and quality of Cuban lyric art. Musicals as “Cecilia Valdés”, “Rosa la China” and “Amalia Batista” superbly performed by Rita Montaner, Caridad Suárez, Miguel de Grandy, Zoila Gálvez and Candita Quintana among others filled the billboards year around.

After several decades of dereliction the theater closed its doors in 1970, waiting until the beginning of the XXI century for availability of restoration resources and technology to bring it back to life.

The restoration process included new mezzanines and wooden stairways, forged iron columns with ornamental elements for the great hall, also rescuing French carpentry guided by historic pictures and the making of a double façade to avoid external noise.  Dressing rooms, cafeterias and outer areas were also revamped and the theater was totally air conditioned; obstacles that could impact the original design were also circumvented.

The City Historian Office, under guidance of Dr. Eusebio Leal, was in charge of the restoration ending with the reopening of the theater on February 24, 2014; former President Raúl Castro presided the opening ceremony.

Counting on state of the art scenography, the theater came back to life hosting the best Cuban lyrics, dance and other contemporary theatrical expressions.  A patrimonial work of Havana’s architecture, the Teatro Martí offers with every presentation the opportunity to enjoy an unforgettable experience.