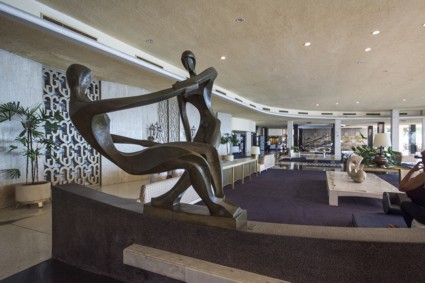 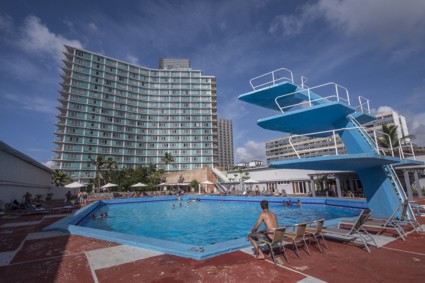 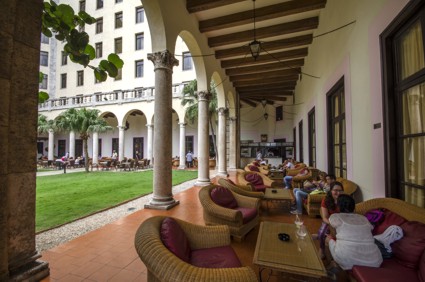 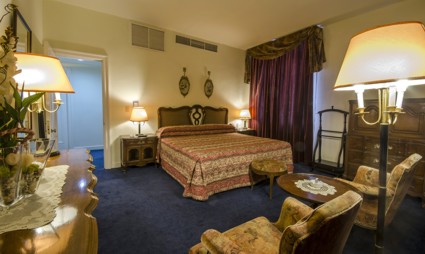 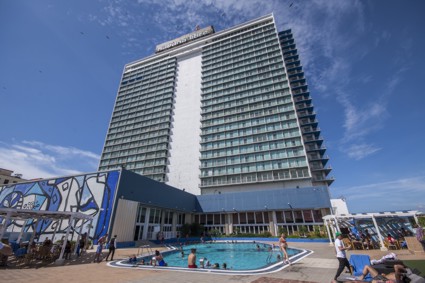 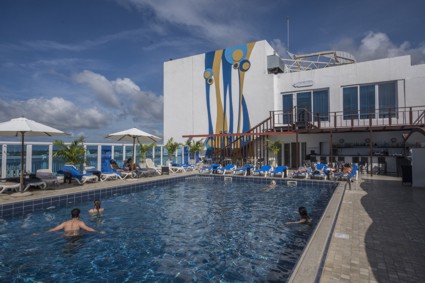 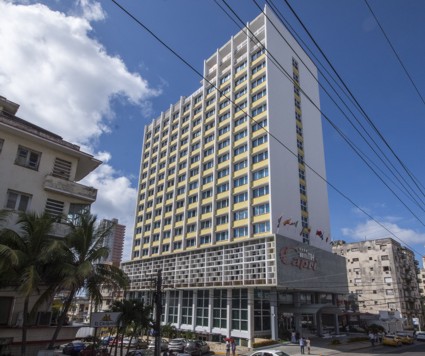 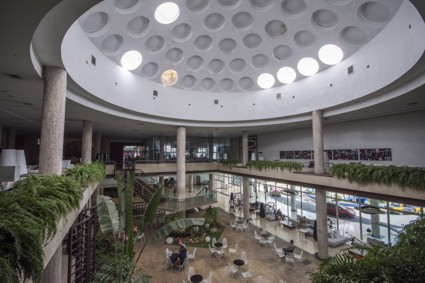 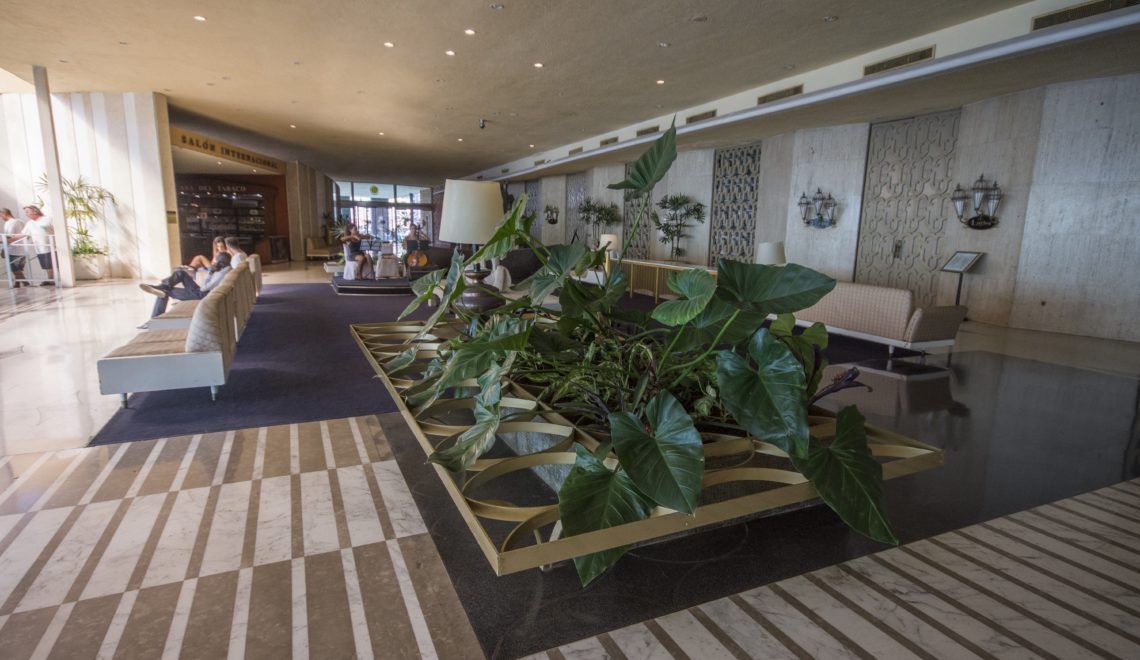 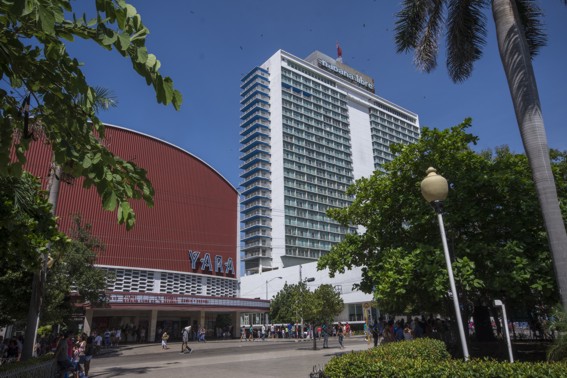 Modern Havana is a true competition of classic hotels: from Hotel Habana Libre, Hotel Nacional, Hotel Capri to Hotel Riviera – sharing its space with massive Meliá Cohiba.As any other city in the world Havana offers an opportunity to travel to the times of architectural marvels in hotel design and construction: to the classics that is to say; its distinctive seal of luxury, elegance and comfort has been well preserved to date.

Hotel Nacional de Cuba, inaugurated December 30, 1930 is first among these classics, proclaimed by UNESCO, due to its history and architecture as National Monument and World Memory. Located in el Vedado area facing the sea, it has been witness to important historical events in its almost 90 years of existence, hosting  famous personalities whose pictures hang in the History Hall in the “Vista del Golfo” bar. Its handsome architecture, a mixture of Spanish renaissance, Moorish and art deco vest the building a palatial air expressed in the monumental lobby with precious wood ceilings and also in the high towers and splendid gardens.

The majestic construction is eight stories high with 457 rooms, 16 of them luxurious suites including the elegant “Apartment of the Republic” with a private entrance destined to chiefs of state and the cozy “Presidential Suite”, host to famous arts, literature, science, politics and commerce visitors.  Its Comedor de Aguiar is considered the classiest and most luxurious restaurant in the Island; on the other hand the Cabaret Parisién offers an incredible experience, turning nights at the hotel into a magical trip along musical and cultural traditions for guests and nationals as well.

El Vedado also harbors a triad of classic hotels inaugurated between 1957 and 1958, built in the modern style of the times.

Hotel Habana Libre, stands on top of la Rampa in the busy Avenida 23 with its easy slope towards the sea. Inaugurated March 22, 1958 under the name Habana Hilton Hotel it was for a long time the tallest building in Latin America and is still today among the first due to its 88 thousand square feet construction, standing 126 meters high. One can enjoy a panoramic view of the city from any of its 630 rooms distributed in 25 floors; to the north el Morro Lighthouse and Old Havana and to the west one loses sight with the Gulf Stream acting as a deep blue background curtain.

All its inner spaces outstand for their elegance wherein the ambiance of the times remains intact.  The huge lobby dome bestowing an agreeable natural illumination provides comfort and massiveness to the area, also recreating on Rita Longa´s Clepsidra that with cascades and multicolored lights and music, tells the time by the hours.  Emblematic areas of the hotel include: the great Salón de Embajadores hall in the mezzanine, designed to host large events and conventions, the Polinesio Restaurant with its 23 Avenue entrance, the Cabaret Turquino in the top floor and the huge 670 square meters‘mural crowning the entrance of the hotel, designed by Cuban painter Amelia Peláez.

Hotel Capri in the 21 and N streets´ intersection, opened its doors November 27, 1957; it was one of the largest casino-hotels in Havana, managed by the Italian-American Las Vegas mafia until 1959. The hotel has an inventory of 250 room in 19 floors with a rooftop pool. Floor numbers jump from 12 to 14 due to the owners’ superstition of the 13th….  A capital restoration gave back the charm of the fifties to this hotel designed following a sober and elegant concept of neutral colors with a minimalist trend. Its former casino is today the Salón Rojo, a cabaret style space with night shows hosting popular orchestras.

Walking along the Malecón to the west we reach Hotel Habana Riviera. It was inaugurated December 10, 1957 and as Hotel Capri, it was managed by the mafia that had in this hotel one of its largest casinos in the Island. It is remarkable example of rationalistic architecture owing to the Modern Movement in Cuba, evidenced by the North American influence of the decade of the fifties of the past century.

The hotel has 352 rooms in its 20 floors, all facing the sea due to the “Y” design of the building. The hotel has a beautiful dome, roofing the former casino, covered with green and blue mosaics offering a beautiful view from afar. Its excellent inner acoustics, originally conceived to seduce the hotel guests by spreading the sound of chips, roulettes and game machines, are today part of a multipurpose space for events and shows.

Its lobby has an elegant furniture and decorative elements, almost intact from its inauguration, excelling its beautiful golden helicoidally shaped suspended stairway, a sculpture and at the same time an access to the lower floor. The Cabaret Copa Room and exclusive Restaurant L´Aiglón are two emblematic spots of the hotel, visited by famous personalities along the years.  The open air huge pool conserves its original three meters´ high springboard, transformed into a romantic spot at every sunset.

In coming to Havana, a visit to these classic hotels provides a superb opportunity to experience the ambiance and the history of those magical years in the prodigious decade of the fifties of the past century.