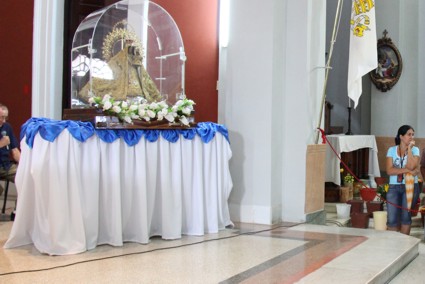 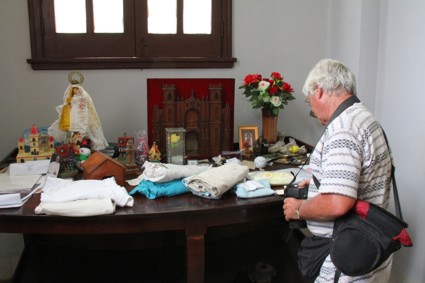 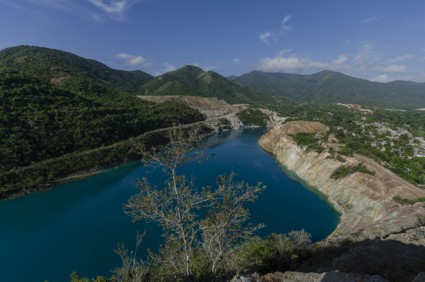 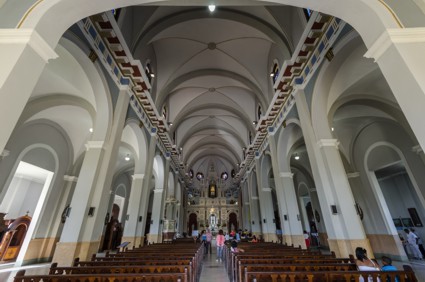 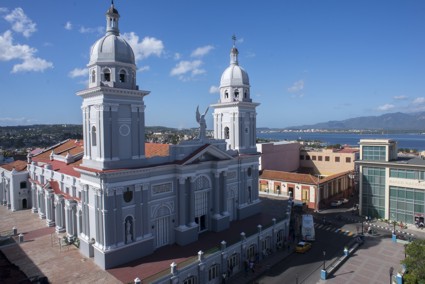 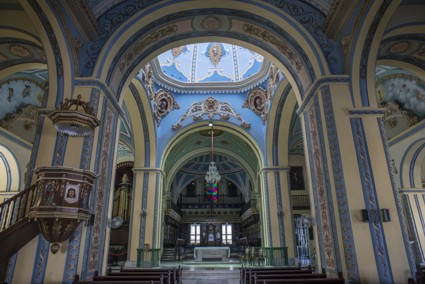 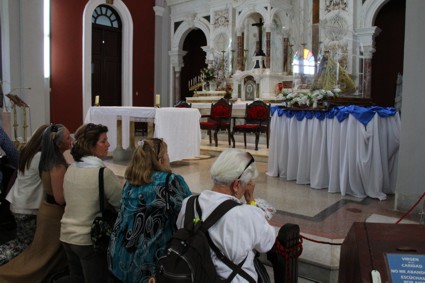 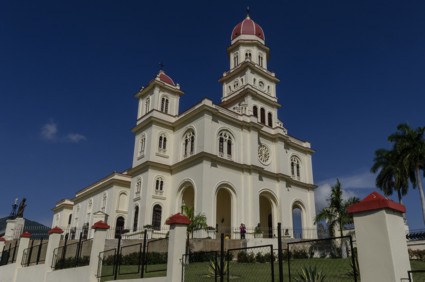 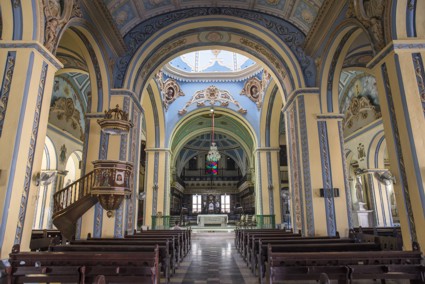 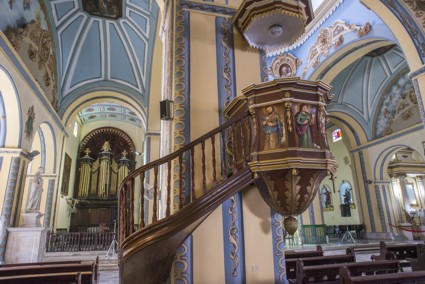 As every September 8, Santiago de Cuba, most Caribbean of all cities, hosts one of the most important religious events in the Island: The Pilgrimage of the Virgen de la Caridad delCobre (Our Lady of Charity). We traveled to this city to speak to Father Catasus, appointed by the city´s Archiepiscopate to preside this passionate pilgrimage; as always warm and kindhearted he agrees to this interview:

“On the night of September 8th  the procession tours all the city, this should not be mistaken with the pilgrimage to el Cobre Sanctuary. This last event originated as a pilgrimage of young people, starting in the San Francisco Church around 11pm and traveling the old el Cobre road to the Sanctuary, arriving there at 4 or 5 am, ending with a mass; it started as a youth event but lately people of all ages have joined this pilgrimage. Also other city parishes join in from August 30th to September 7th visiting the Sanctuary. What happens in Santiago since 2007 or 2008, I don´t remember well, is the Virgin´s Procession that departs from the Archiepiscopate to the Cathedral´s atrium with offerings, blessings and chants from city dwellers”

Is this devotional feast already a yearly tradition to be held in Santiago de Cuba?

“I think it is, the call of the people and their ever growing interest can turn this event into a great tradition; but we still have to wait, it has been going on only for ten or eleven years and is not like other older and more traditional pilgrimages. In Apostle Santiago´s day the image kept in the Emilio Bacardí Municipal Museum is toured around the Cathedral´s atrium and then taken to the park where people receive the blessings of the Archbishop; there is also an Easter Sunday pilgrimage and even one in Songo la Maya that started a few years ago on March 19th to honor Saint Joseph, the city patron. In comparison this pilgrimage cannot be considered a tradition as the one to el Cobre that began some twenty years ago”

How did the Pilgrimage to el Cobre Sanctuary started?

It was the Archbishop´s idea, who having as a reference the rest of the city pilgrimages, aimed to rescue a popular devotional expression based on their most worshiped image, the Virgen de la Caridad. There is also another reference in the Virgen Mambisa (Virgin of the guerrilla soldiers during the Cuban Wars of Independence) pilgrimage along the Island during 2010 and 2011, representing illumination for the Catholic Church in the country due to the many demonstrations of worship and love of the people in the face of the image of the virgin”

Please Father, expand some more about this Pilgrimage

“The pilgrimage starts in the Archiepiscopate located between San Jerónimo and Paraíso streets, from there it travels from Paraíso Street to the corner of Enramadas Street and down again along Enramadas to Santo Tomás Street, from there up to the Cathedral´s atrium where the blessing to the people takes place.  Two years ago Enramadas Street was closed to traffic so now the procession goes down Aguilera Street leading to ParqueCéspedes and up Santo Tomás Street; the police deviates transit in these city areas”.

“It is a true demonstration of love not only from the people of Santiago de Cuba but also from other parts of the country and even from other countries, who come as a curiosity or for research or journalism purposes, but there are others as well who travel to our country on that date to celebrate the day of the Saint Patroness”.

“The Virgen de la Caridad del Cobre is not only Cuba´s Patroness, but other places as the neighborhoods of Azanos in Tenerife and Gallegos in Las Palmas in the Canary Islands and Muras in Galicia also consider Her their patroness; there is also great faith in Florida in the United States where a sanctuary and many other churches are devoted to this virgin”

What is the significance of the Virgen de la Caridad del Cobre for the Cuban people?

“I am forever convinced that She is the most important measure of faith of our nation, deeply rooted in the heart of Cubans, also considering their profound devotion to Hersince the discovery in the Bay of Nipe more than 400 years ago.  There are many reasons for this: miracles attributed to Her, the presence in every moment of our present and past history; yes, there are many reasons to consider the virgin our most beloved and important spiritual guide”

“I personally totally worship the virgin since I was a little boy, sitting next to my mother while she prayed with her rosary.  As an adult I have dedicated many décimas (octosyllabic stanzas) to her, as the ones I composed when el Cobre Sanctuary was proclaimed as Minor Basilica. The stanzas are always inside my head as the highest demonstration of love to Her.They go like this:

“Morning star,
The shine in the waters
To the three of Barajagua
Who were bravely rowing,
Was not a meaningless adventure
Since the salt falling on them
From salt to love would change
Upon seeing the myth in the sea
Of the floating image
Of the Caridad Virgen María(…)”