Main tourism destination in the southern center of the Island and one of highest demand, timeless Trinidad conserves its five-century charms inviting you to enjoy the travel experience.

As imprint of former colonial splendor, this very old city envelops the visitor within a well-preserved architectural setting – one of the best in Cuba and the region – marked by XVIII, XIX and early XX century buildings exhibiting a combination of styles and at the same time, unaltered environmental coherence, thus its name Museum City. 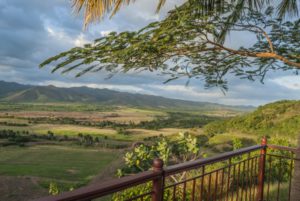 Proclaimed World Heritage Site in 1988 together with the Valle de los Ingenios, the Villa de la Santísima Trinidad was the third founded by Diego Velázquez in January 1514.

An authentic colonial city possessing a tourism infrastructure and modern hotel facilities that perfectly blend with the surrounding environment.

This tourism villa has a lot to offer….the Historical Center options include touring the Santa Ana, las Tres Cruces and Mayor Plazas, the last one laid out since foundational times; the Conde Brunet and Cantero Palaces, the Santísima Trinidad Parochial, the San Francisco Bell tower and numerous minor palaces the visitor identifies when walking along narrow bystreets.

Works of artisans, artists and painters fill the busy streets, harmoniously blending their marketing with a sustainable local project, proclaiming Trinidad as World Artisan City due to the craftworks of yesteryear. One cannot avoid the Casa del Alfarero, living exhibit of a Santander family local tradition, showing how artisans prepare ceramics in different production stages.

One of the most intense experiences of the colonial past is just 15 km away in the Valle de los Ingenios with its rural colonial mansions, ruins of former sugar mills and the symbolic 45 meters ‘high tower of the Torre de Manaca Iznaga, used to oversee slaves´ work in the fields during colonial times.

Tourists who prefer combining the tourism experience with visits to the beach can opt for the Ancón Peninsula, 10 km away, with main offers located in Ancón and María Aguilar beaches including, besides tranquil and crystalline waters: water sports, diving, fishing, underwater photography and yacht tours to the keys.

Complementing the modern hotel infrastructure one can find a wide array of services and facilities, including the Base Náutica Trinidad and the Centro Internacional de Buceo Cayo Blanco diving center with 30 immersion spots.

As to all-inclusive beachfront hotels: Brisas Trinidad del Mar, Club Amigo Costasur and Club Amigo Ancón; and in a true nature environment in Topes de Collantes: Los Helechos and Villa Caburní. Additionally, the destination as a whole has a 2 600 room´s inventory in private homes.

The non-hotel offer encompasses a rich proposal of cafeterias, restaurants, inns and more than a dozen souvenir, cigar and liquor shops.

Trinidad´s location is quite advantageous for tours sold in tourism bureaus and travel agencies located in hotels; this modality favors travel to nearby destinations as Sancti Spiritus, Cienfuegos and Santa Clara, a way to enrich the travel experience visiting spectacular natural sites.

Trinidad is of easy access by road including itineraries of different bus routes as Viazul, also counting on a domestic airport.