Bienvenidos best wishes for this 2019 escorts some of the best proposals for Havana already celebrating its 500th anniversary coming November 16. 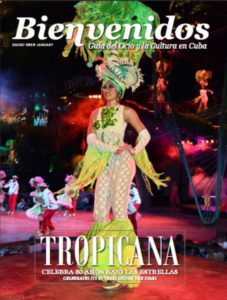 ong them: Hotel Nacional, linked to most important events of the past century in the capital; the 80th anniversary of world famous Tropicana cabaret next December 31, the International Book Fair from February 7 to 17 in la Cabaña Fortress. In addition, the Habanos Festival from February 18 to 22 where Cuba keeps its foremost standing…topped by the “Reencounter” with the city in a poem by Amalia Marín.

The best Cuban music comes as well in exclusive interviews with Elíades Ochoa, an icon of Buena Vista Social Club and popular musician Isaac Delgado. There is also an invitation for the 2019 Jazz Plaza International Festival in its 34th edition from January 14 to 20 with Havana and Santiago de Cuba as host cities.

As closing, a trip to Gibara allows you to share with locals two centuries of that magic Holguín villa.