Guama: A natural paradise with a native name 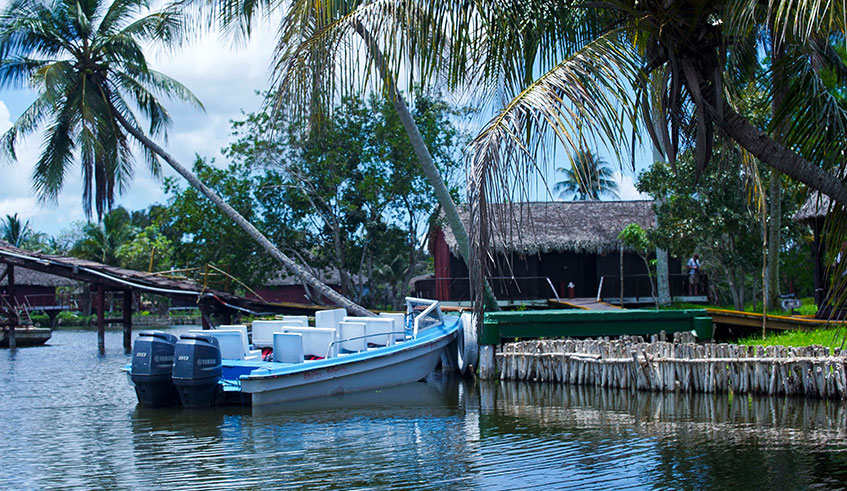 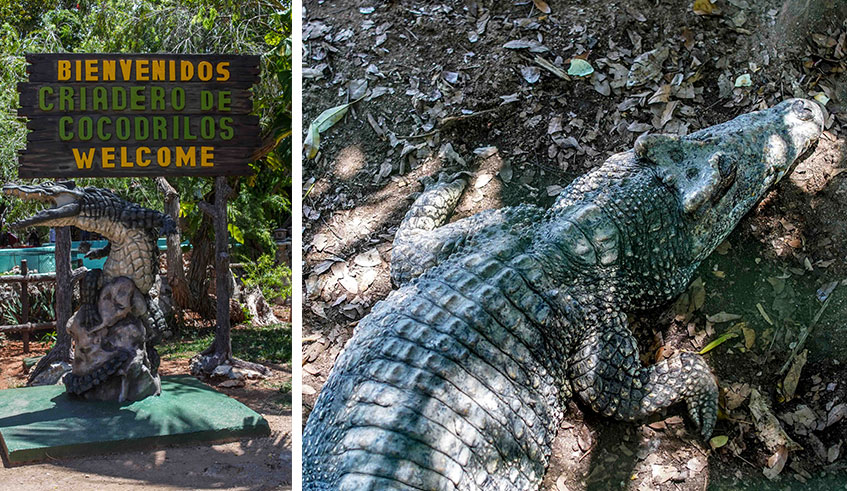 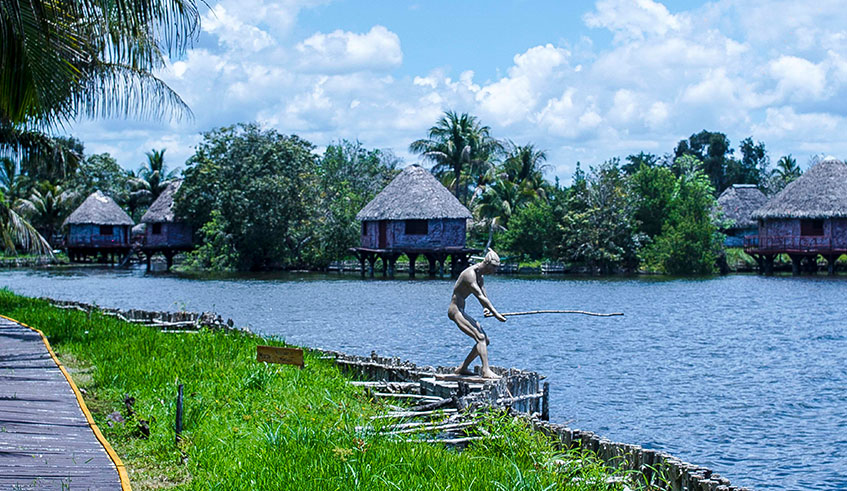 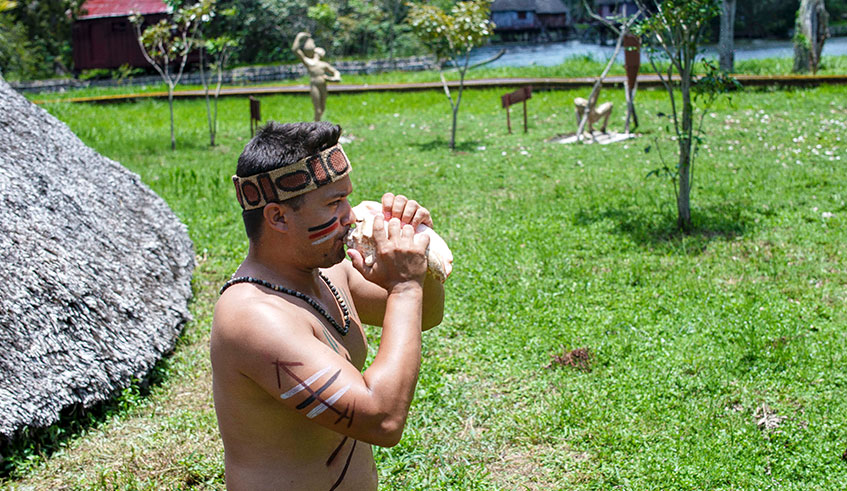 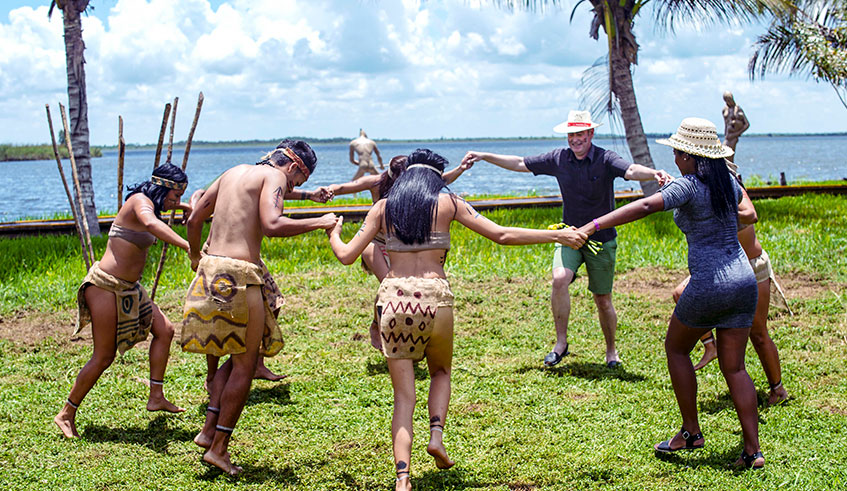 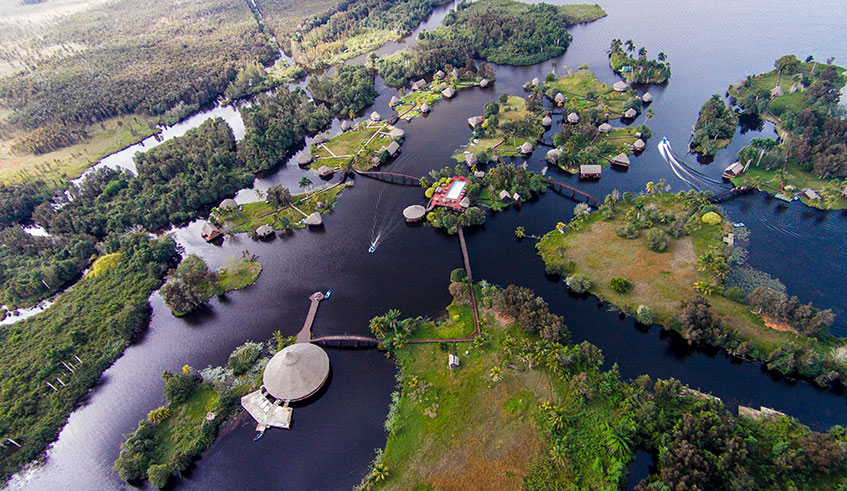 The afternoon is falling, and the sunset is reflected in the crystalline waters. Surrounding the lagoon are the Taino people, performing their daily activities, when someone blows the conch shell and calls them to meet and welcome the visitors.

We have arrived at the Taino Village, a picturesque reproduction of Aboriginal life, in the Guama Tourist Center located in the Ciénaga de Zapata, in the south of the province of Matanzas.

After boarding the speedboat that crossed more than 8 kilometers in the Laguna del Tesoro, we arrived at a small islet of the mainland, which is crossed by a path. Going through it we discovered various art pieces of the famous Cuban sculptor Rita Longa, which imitate the usual tasks of the simple and diaphanous life of these first inhabitants.

In front of your they’re standing, quiet, and hunt; they plant yucca to cook casabe[1], and their eyes have the parsimony of the immobile statues, the beauty of the horizon, and the calmness of the great mass of fresh water, one of the largest reserves of drinking water of the Caribbean island.

Sitting down under the shade of a tree, one of them weaves a net, which the community will use later in fishing, and others, seated in circles, inhale a twisted tobacco roll, perhaps the ancestor of the famous Cuban cigars.

Later, a little closer to the rustic dwellings, while dancing, they choose, at random, from the newcomers, a couple, to give them their blessing, in a ceremony that will give them good luck and prosperity. The rite is sealed with the delivery of some autochthonous flowers of this area of ​​the swamp, the largest wetland of the insular Caribbean.

Each year, tourists from all latitudes choose the Zapata Peninsula as their destination, where the Laguna del Tesoro is located.

Legend has it that the native tribes of these areas, after the Spanish conquest, decided to throw into the water their most precious belongings, so that they would not fall into the hands of the armed newcomers. That’s where its name comes from, but, nowadays, natural wealth stands out as its true attraction. This landscape, with more than ten islands, was categorized by UNESCO as a Biosphere Reserve, National Park and Ramsar Site.

Only 90 kilometers from Varadero, the road to the Peninsula is not difficult to travel. It can be accessed by tour buses of different tour operators, or by private road trips.

The boats heading to the Tourist Park sail from Boca de Guama, where is the largest Crocodile Hatchery in Cuba with more than 4000 specimens.

Specialists and professionals organize different activities throughout the year for those interested in this vigorous species, offering details of its conservation and reproduction. The Cuban crocodile is the most attractive for visitors; it stands out for the combination of adaptations that make it the smartest of its kind.

Guama has a hotel infrastructure based on the protection of the Environment, after decades dedicated to the development of Ecological Tourism.

More than 40 comfortable, air-conditioned cabins, with a careful design, bear resemblance to the aboriginal villas and are available for a pleasant stay. Each one has access to boats that sail across the Lagoon. A bar, several souvenir shops and the Abey Restaurant are part of their exploration areas.

Tourists can also practice kayaking and sport fishing in the Capture and Release mode, and the Technique: Fly.

The conditions for birdwatching are exceptional, and also, the visitors can discover the diversity of the Cuban Flora and Fauna. It is estimated that there are around 1000 species of native plants, including endangered animal species such as the manjuari and the manatee. The trip to the Zapata Peninsula is a valuable experience for lovers of Nature Tourism. This natural paradise with aboriginal name, brings us closer to the pre-Columbian essence of the first Cuban inhabitants, and gives us an incomparable landscape of natural beauty.